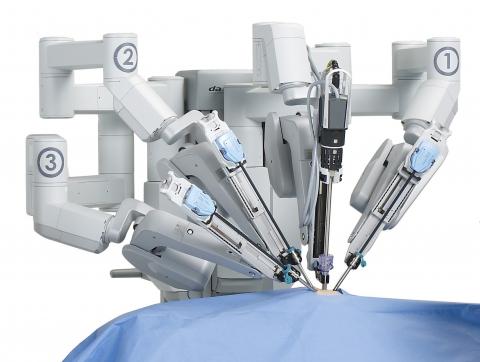 Cutting-edge instruments, whose design replicates what the human arm can do, intuitive movement control, high-definition 3D imaging functions… Robotic surgery or robot-assisted surgery is successfully used for the treatment of many diseases and is applied entirely under a surgeon’s control.

Robotic surgery is a surgical method where surgery is performed through tiny holes by means of the da Vinci Xi. In a series of articles, specialists from Anadolu Medical Centre will introduce us to the method, its advantages to the other surgical methods and the areas it is applied in.

How does robotic surgery work?

One of the most intriguing aspects of robotized surgery, of course, is the manner of its application. The surgeon performs the robot-assisted surgery from a console navigating four robotic arms. The robotic arms function as scalpels, holders, Bovies, and grasping retractors.  While robotic arms are on the patient, another surgeon is beside the patient’s head and places the required instrument in the robotic arm. The operating surgeon performs the surgery from the console, located 3-4 meters away from the patient. By means of a camera, the surgeon monitors the 3D image of the body on the console. The console is so developed, as to enable the surgeon to make use of the four arms on the patent. One of the four robotic arms acts as a camera, two of them act as the surgeon’s left and right arm, and the fourth one is used to remove from the surgical field tissues which may impede the surgeon’s operation (retractors). Not only does the device allow immobilization of any of the arms, but it also enables arms to be kept completely still, to be moved up to 540 degrees to a level, which is unreachable by the human hand, and to neutralize the trembling of the human arm.

According to classical surgeries, thoracoscopic and laparoscopic surgeries, the robot-assisted surgery provides many advantages and more comfort both to patients and surgeons and it is a step forward in the minimally-invasive surgery. Anadolu Medical Centre hosts state-of-the-art robot-assisted surgery systems and an experienced team ofexperts who have performed a number of surgeries in various fields. This method is used in the surgical treatment of many diseases, and especially cancer diseases.