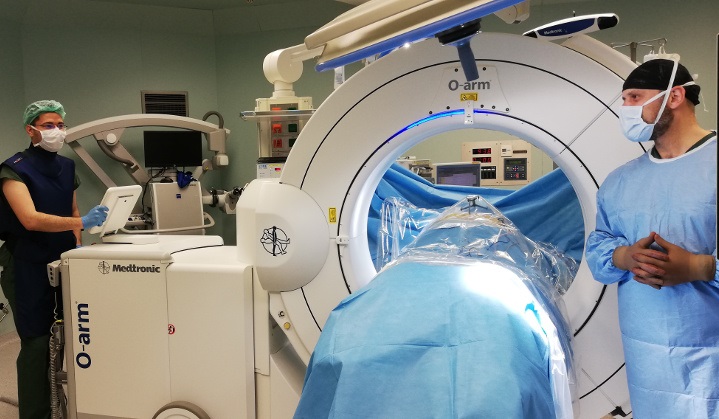 Computed tomography can be filmed during the operation with the mobile tomography device which is a new generation imaging system. With this technology, 2 or 3-dimensional imaging can be performed in both brain and spine-spinal surgery. Moreover, in a three-dimensional 360 ° angle it takes less than 13 seconds. The system also has robotic positioning. By this way, the device can be brought closer to the patient and tomography can be imaged very quickly in the operating room. An important advantage of this can be described as follows: since it takes only one image at a time, the images with the same image quality can be viewed throughout the surgery with one third radiation amount when compared with other standard tomography devices. It is especially used in surgeries including;

The place where the screw should be placed in the spine varies according to the anatomical region but should be determined with 1-2 mm accuracy. Until recently, spine screwing operations were performed with a C-arm and 2-dimensional X-ray machine called “scopy”. In these surgeries, the patient could be re-operated due to the possibility of the screws going into an undesirable area, which increased the risk of infection and length of hospitalization. However, the success rate of screwing operations performed with O- Arm CT technology, increases with 3-dimensional tomography image and the margin of error is reset. O-Arm-CT is compatible with all targets highly neuronavigation system and can have a precision operation which can further increase the chance of success. Therefore, with a sensitivity of 1-2 mm, the risk of injury to the spinal cord and nerve roots is almost eliminated and a safer operation is performed.

Thanks to the O- Arm CT system, undesirable situations that require re-operation of the patient (for example, screw entering the wrong place in spine screwing operations, blood accumulation in the operation area in brain surgeries) are minimized by taking tomography under sterile conditions at the final stage of the surgery.

To summarize the advantages of spine screwing operations performed with O- Arm device: