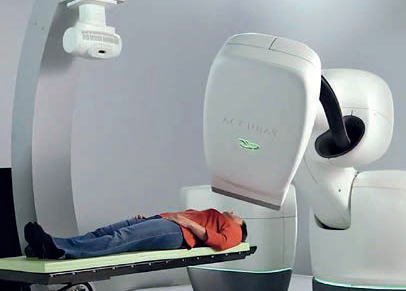 Lung tumours are among the most frequently occurring neoplasms, the treatment of which requires simultaneous administration of several methods, radiotherapy being the one which is most commonly used either alone, or in combination. Surgery is the first choice in primary tumours (stage 1 and stage 2) and in more than 70% per cent of the cases the outcome is full healing. In case of comorbidity, however, the first choice for treatment radiotherapy is. It assists for increasing patient’s survivability when metastases are found in the lung or if there is primary tumour recurrence.

The development of radiation oncology encountered and dealt with major problems with respect to the respiration–induced tumour movement or the use of limited number of target angles and insufficient radiation dose.

When treating lung cancers, because of the movement of organs between the fractions or in the order of the fractions, deviation in the target may result. The paramount reason for this is the mobility of the respiratory system. The degree of the respiration-induced motion of upper lobe or chest wall tumours is small, whereas small peripheral tumours are characterized with more motion. 1-3 cm motion is observed upon deep inhalation or exhalation in such tumours. Therefore, 1-2 cm secure margin  is added during conventional radiotherapy, which reduces the risk of the tumour’s falling outside the treatment boundaries. This situation, however, causes the administration of a significant radiation dose by the surrounding organs such as heart, spine, oesophagus. That is why the use of a large enough secure margin when conducting conventional radiotherapy disables any increase in the dose.

The new radiosurgery and radiotherapy systems provide for overcoming this disadvantage. One of the greatest advantages of Cyberkife M6 and Varian Edge is the possibility of real-time synchronization with respiratory-induced organ movement. The radiation planning systems estimate the possibility of sending 1200 virtual point rays to each particular treatment area. The system accepts the data, set as necessary and tolerant dose to the treatment area and finds out the points that are most appropriate with respect to treatment, which should ensure effective and safe radiation performance. Depending on the position of the tumour during respiration, the equipment shall reallocate to the active rays. The elimination of the necessity of large security margin provides for increasing the dose. The target has thus been aggressively attacked by 200-300 rays with a maximum dose, whereas the organs and tissues surrounding the targeted tumour shall be exposed to minimum or even zero radiation.

Thus, by means of radiotherapy, up to 100 % local control is achieved in early stage tumours. Not to mention the improved patient’s comfort during radiotherapy and the reduced treatment length.